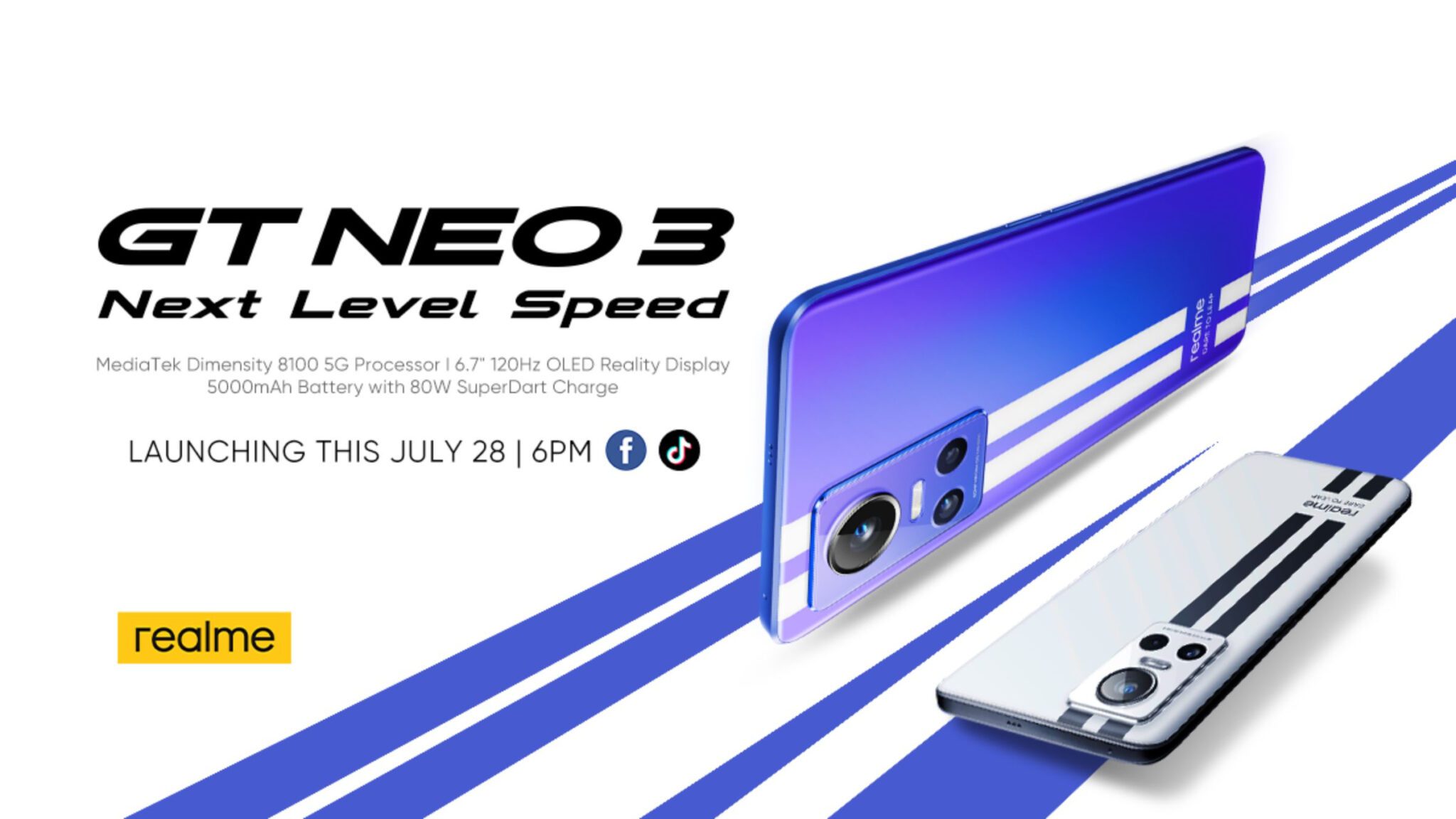 realme Philippines tends to do these high-end phone releases around this time of the year. Last year, the company did something similar with the release of the realme GT Master Edition. This year, we’re getting the realme GT NEO 3 alongside a new pair of TWS earbuds, the realme Buds Q2s! Both of them will have their launch via a live stream on Thursday, July 28, 2022 on the realme Philippines Facebook and TikTok pages.

Performance and Fast Charging to the Next Level!

Powering this smartphone with next-level speed is the MediaTek Dimensity 8100 5G processor! Combined with its built-in Vapor Chamber Cooling System Max, you are sure to have a great gaming experience without worrying too much about overheating the phone. The new cooling system enhances the phone’s cooling capability and has much faster heat dissipation.

The GT NEO 3 won’t let you down thanks to its large 5000 mAh battery with 80W SuperDart Charge. You can charge the phone from 0 to 50% in just 12 minutes! That’s pretty fast, and you can be sure that the phone can comfortably last a day.

All that power won’t matter if the screen you’re staring at can’t hang with the rest of the phone! Good thing that the GT NEO 3 comes with a 6.7-inch 120Hz OLED Reality Display with a 94.2% screen-to-body ratio and a 360Hz touch sampling rate. This display goes up to 1000 nits of peak brightness and has Gorilla Glass 5 protection. All of these capabilities are possible thanks to the dedicated display processor that’s in this phone. It ensures that the display can maintain its smoothness.

The GT NEO 3 has this sleek Racing Stripe Design that’s inspired by the Ford GT40 that beat a Ferrari for the first time at Le Mans back in the 1960s. It’s a nice symbol of the next-level speed that this phone offers to Filipinos.

Alongside the GT NEO 3, we’re also getting a new member of realme’s TWS earbuds: the realme Buds Q2s! It has impressive features such as its 30 Hour Total Playback, 10mm Bass Boost Driver with Dolby Atmos Support and 88ms Super Low Latency.

What to Expect from The realme GT NEO 3 Launch

Besides the launch of two much-awaited products, realme Philippines has some surprises for its beloved squad! They prepared some exciting activities they’ve been brewing up! Make sure to tune in to the launch live stream on Thursday, July 28, 2022 on the realme Philippines Facebook and TikTok pages.