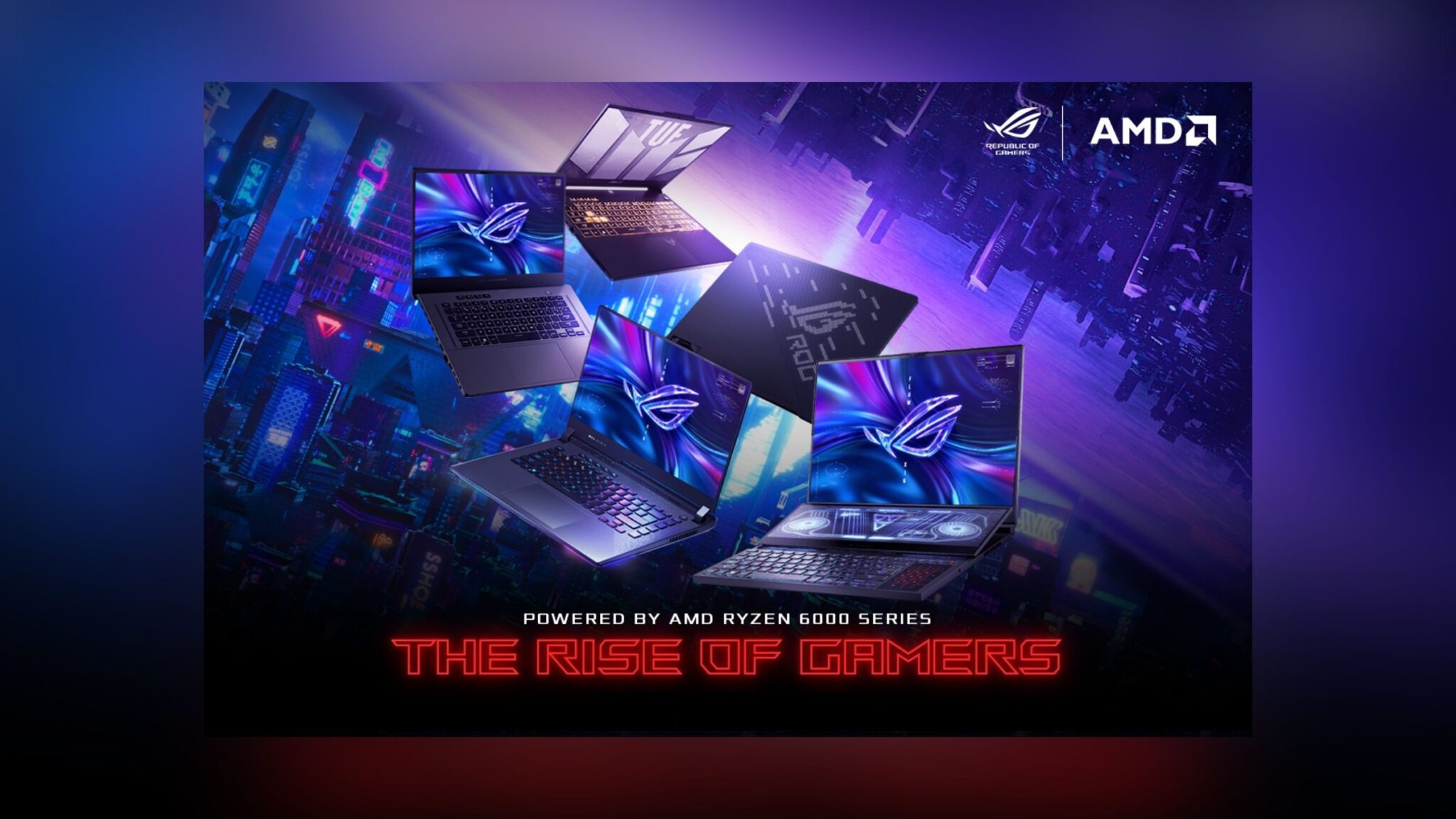 Months after ASUS ROG launched its 12th-gen Intel gaming laptop lineup, it’s time for Ryzen to shine! The company just launched the ASUS ROG AMD Ryzen 6000 gaming laptop lineup in the Philippines. This happened during the ROG Rise of Gamers 2022 Digital Launch Event. Headlined by the 2022 model of the ROG Zephyrus G14, this whole lineup showcases refined style, power, efficiency, and signature ROG features with the AMD Ryzen 6000 Series of CPUs. Let’s get to know the lineup!

Get the AMD Advantage with the new Zephyrus G14

I did just say AMD Advantage, right? That’s because the new ROG Zephyrus G14 now rocks up to an AMD Ryzen 9 6900HS processor and up to an AMD Radeon RX 6800S Mobile GPU! These allow the new G14 to gain access to AMD-exclusive technologies such as Smart Access Memory and AMD SmartShift. This laptop also features a MUX Switch to deliver outstanding performance alongside high-speed 4800 MHz DDR5 RAM and a 1TB PCIe SSD for a more responsive experience.

The new Zephyrus G14 is one of the first ROG laptops to rock the Nebula Display. It’s a 120Hz QHD Adaptive-Sync display with a 3 ms response time, Dolby Vision HDR support, 500 nits of peak brightness, and 100% coverage of the DCI-P3 color gamut with Pantone validation. On top of that, it has a 16:10 aspect ratio and a 91% screen-to-body ratio for a more immersive experience when gaming.

There’s a custom vapor chamber that covers the CPU, GPU, and the VRMs and spans 48.2% of the mainboard, Arc Flow Fans for more airflow, and Thermal Grizzly liquid metal for better cooling on the CPU and GPU. The popular AniMe Matrix display now consists of 1,449 mini LEDs that now have new animations which let you customize the look of your laptop more.

It also has an upgraded audio experience thanks to improved speaker placements, a larger trackpad, that 180-degree ErgoLift hinge and a webcam for online meetings, and face unlock with Windows Hello.

This flagship ROG AMD Ryzen 6000 laptop comes in two colors: Moonlight White and Eclipse Grey. It will be available in the Philippines starting Q3 2022 in these configurations:

Unlike the G14, the Zephyrus G15 just gets a host of minor upgrades to please the lifestyle gamer out there.

The 2022 edition now carries up to an AMD Ryzen 9 6900HS processor and up to an NVIDIA GeForce RTX 3080 GPU at an upgraded TGP of 120W and an included MUX Switch. You also get up to 32GB DDR5 RAM and a 1TB of PCIe 4.0 SSD to support that high-end performance. We now get a 15-inch QHD display with up to a 240Hz refresh rate for a smoother gaming experience. It also supports up to 100% of the DCI-P3 color gamut, Dolby Vision support, and Pantone Validation for more accurate and vibrant colors.

A new addition to the Zephyrus G15 is a 2D/3DNR IR Enabled Web Camera (same as the new G14) for online meetings and Windows Hello face recognition. This laptop also has an improved keyboard and larger trackpad

Like the G14, the Zephyrus G15 comes in two colors: Moonlight White and Eclipse Grey. It will also be available in the Philippines starting Q3 2022 in these configurations:

Featuring ROG ScreenPad Plus, the Zephyrus Duo 16 takes the gaming laptop experience to a whole new level. Its 14.1-inch secondary screen can host your favorite apps so you are uninterrupted during your gaming sessions. You can quickly switch between apps or rearrange the screens without any fuss thanks to robust Windows 11 support.

The ROG ScreenPad Plus automatically rises when you raise the main lid, settling at a 13° angle for maximum ergonomics and airflow. It even gets a brand-new four-directional hinge that allows ROG ScreenPad Plus to slide back while raising at the same pace. ROG’s AAS Plus 2.0 system takes advantage of the 28.5 mm of free space between the screen and chassis to take in 30% more fresh air than traditional gaming laptop designs.

Just in case you think that the main display didn’t get any love, you are sorely mistaken! The Zephyrus Duo 16 comes with a QHD, 16:10, 165 Hz Nebula HDR display that’s capable of 1100 nits of peak brightness and has a 91% screen-to-body ratio. That Nebula HDR display is made up of mini LEDs with 512 local dimming zones that contribute to that eye-watering peak brightness. It has VESA DisplayHDR 1000 certification and is powered by AUO’s AmLED technology and ROG’s Nebula HDR Engine.

With an AMD Ryzen 9 6900HX processor and an NVIDIA GeForce RTX 3080 Ti Laptop GPU with a 165W Max TGP and a MUX Switch, you can enjoy the latest AAA titles at high refresh rates! Supporting this insane horsepower with up to 64GB of 4800 MHz DDR5 memory and up to 4TB of PCIe Gen 4 x4 storage in a RAID 0 array. To keep the CPU and GPU really cool, the Zephyrus Duo 16 comes with Thermal Grizzly Conductonaut Extreme liquid metal.

You can get this new ROG AMD Ryzen 6000 laptop starting late June 2022 in these configurations:

For those who need gaming laptops for competitive e-sports, there are upgraded models of the Strix G15 and G17. You can get up to a 240Hz QHD display, up to an AMD Ryzen 9 6900HX CPU, and up to an NVIDIA GeForce RTX 3080 GPU with MUX Switch. It comes in two colors: Eclipse Grey, and a new Electro Punk.

You can get the ROG Strix G15 and G17 in the following configurations with some of them already available now:

New models of the TUF Gaming A15 and A17 are now available with significant improvements in performance compared to the previous generation. You can get them up to an AMD Ryzen 7 6800H processor, up to an NVIDIA GeForce RTX 3070 GPU with 140W Max TGP & a MUX Switch, up to 16GB of DDR5 RAM, and up to a Full HD 300hz Adaptive Sync display with 100% sRGB coverage.

Some of the TUF Gaming A15 and A17 models are already available in the following configurations in Mecha Grey and Jaeger Grey colors. There are also models that will be available in mid-June 2022.

You can check out your nearest ASUS and ROG Concept Stores and get your next ROG 2022 Gaming Laptop! Check the complete list of stores here: https://asus.me/ASUSPHWhereToBuyLaptopsAndDesktops.

What do you think of these new ROG AMD Ryzen 6000 series of gaming laptops? Sound off in the comments!