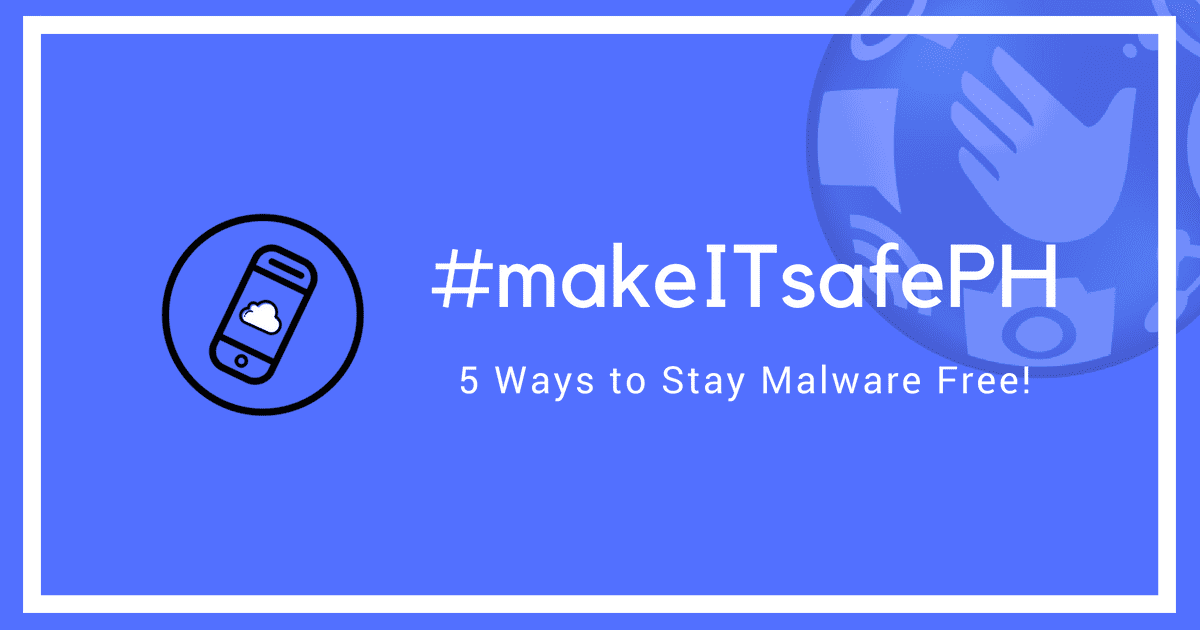 Ahh, malware. You may not know it, but it’s just there lurking around us! It may be in a link that your friend carelessly sent you. Malware could also appear in your email! Those things can also disguise themselves as ads! It’s insane when you think about where it can go. As part of Globe’s #makeITsafePH campaign, I’m here to share to you 5 WAYS to Stay Malware Free! These are 5 simple tips you can watch out for so you can be sure to stay away from all that malware!

There are a lot of websites today that contain A LOT of unnecessary advertisements. Some of them may be legitimate, but others are tricky and may contain hidden malware! Always look for weird buttons that are near the real links. For example, most fake Download button ads appear near the real download button. They are usually bigger and you can mistake them for the real buttons. It also helps that you know how normal links and buttons look like in your computer or smartphone.

Malware Free Tip #2: Watch for “Too Good to be True” Emails.

Whoa. This one’s a doozy. Most modern email clients can already filter out those bad actors containing suspicious stuff. Sometimes, they can get through and land on your inbox! If the subject of the email contains things like “You won a car!” or “Please provide your payment information.” and you know that you haven’t done anything about that, it’s probably a scam that contains malware! Always make sure to read emails properly before handling them.

Speaking of emails, you should also make sure that ALL attachments in your emails are scanned for viruses and malware. They could be hiding in the attachments and you could more likely get them there! Make sure to check each attachment properly before downloading it to your computer.

Back in the day, I used to get my software from unknown places. Some of them could contain viruses and malware that can potentially expose my computer to a lot of bad actors worldwide! I could lose a lot of data and could never recover from it right away! Also check if you installed original software or not. Also, check where you download your software if it’s also open to such malware or not.

Wi-Fi is EVERYWHERE. You can pretty much go to a public place and have access to a Wi-Fi connection. The problem with most of them is that they lack security. Without it, computers and smartphones that connect to it can be exposed to a whole lot of malware! Even if you manually disconnect from the network, it could be too late! When connecting to an open Wi-Fi network, make sure it’s a connection that you trust a lot. There you have it! Those are my 5 tips for you to stay malware free! Anything else I missed? Have you tried getting malware on your devices before? Let me know in the comments below! About the #makeITsafePH campaign:

Hootsuite, a US-based social media management platform, has released its “Digital in 2018” report of social media and digital trends around the world.  The report revealed that the Philippines now has 67 million Internet users, with all of them active on social media.  This widespread use of the internet gives rise to the emergence of internet-related crimes such as rape, theft,  bullying and piracy which made the public, especially the youth, very vulnerable.

Because of this, Globe Telecom, being a purveyor of digital lifestyle, came out with the #makeITsafePH cybersecurity and cyberwellness campaign to educate consumers about online threats and what they can do to avoid becoming a victim.  The campaign also teaches the public proper online etiquette so that they would not become a source of such deplorable behavior.