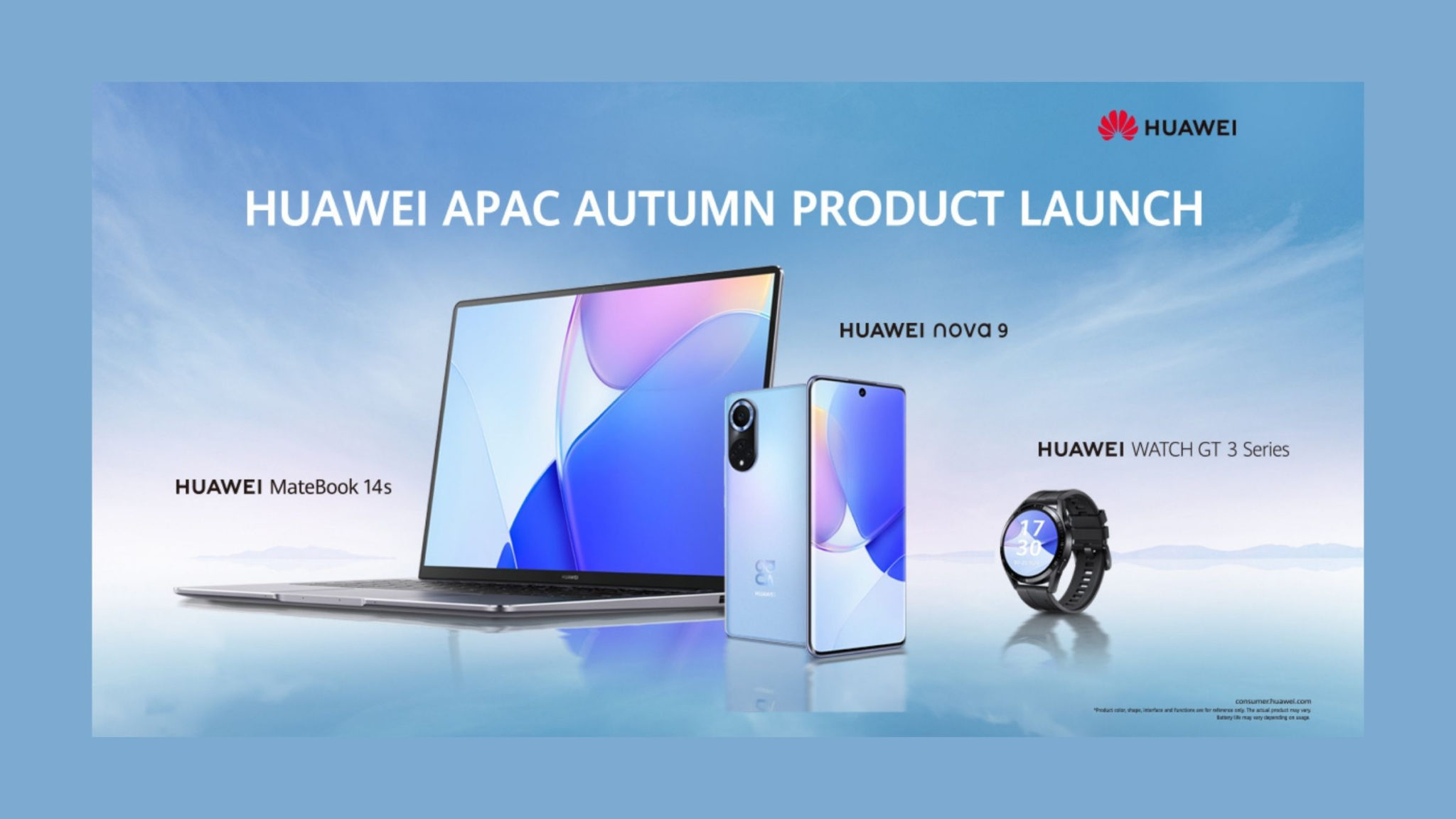 HUAWEI recently did its Autumn Product Launch for the APAC region. They launched three new products that will further enhance the overall HUAWEI ecosystem. Those are the HUAWEI MateBook 14s, HUAWEI nova 9, and the HUAWEI Watch GT 3 Series.

Don’t be fooled by this slim body. The HUAWEI MateBook 14s has a lot of power inside it! It starts with the 2.5k Huawei FullView Display that has a 90Hz refresh rate and a 3:2 aspect ratio. This display also has a 10-point multi-touch capability to allow for easier user navigation. You’ll also be pleased with its narrow bezels and a high 90% screen-to-body ratio.

The performance of the MateBook 14s is more than you expect! This is thanks to 11th-gen Intel Core H-series processors and Intel Iris Xe graphics. It even has a performance mode that boosts the CPU’s TDP to 45W. You can be sure that the laptop will last long with its 60Wh battery. You can charge it with the 65W power adapter which lets you work for 3 hours on a 15-minute charge.

Alongside the MateBook 14s, we also get a new Nova smartphone in the form of the HUAWEI nova 9! Its standout features include a 50MP Ultra Vision Camera, a 6.57-inch display with a 120Hz refresh rate, and support for 66W Huawei SuperCharge fast charging technology.

That 50MP camera carries the flagship RYYB color filter array and the XD Fusion Engine. Both were previously found in the company’s flagships! These help dramatically improve image quality bringing in 40% more light and has AI features such as AI brightening and anti-distortion. Huawei packed all of that camera tech in a remarkable Star Orbit Ring camera layout!

Fresh off the HUAWEI Watch Fit New, we now get the new HUAWEI Watch GT 3 series! As of now, we don’t know how many smartwatches we’re getting. Regardless, you’ll get cool new features such as AI Running Coach and over 100 workout modes. Both of those digitize and supervise the intensity and duration you want to achieve. The improved five-satellite and dual-band GNSS accurately pin your position when you are jogging across the city.

With TruSeen 5.0+, the HUAWEI Watch GT 3 can provide accurate readings of heart rate, blood oxygen, and skin temperature all day! You can be sure that the smartwatch can do that for longer with up to 2 weeks of battery life.

All of those features don’t compromise on the premium feel of the HUAWEI Watch GT 3 series. Thanks to its Premium ID design with stainless steel material and rotating crown design, you can wear it whether for work or for play. HarmonyOS powers this new smartwatch, so it can seamlessly connect to other Huawei devices.

You can now preorder the HUAWEI MateBook 14s from October 29 – November 11, 2021. The Core i5 model retails for P68,999 and the Core i7 model retails for P89,999. If you buy during the preorder period, you can get P18,488 worth of freebies that includes a HUAWEI FreeBuds Pro, a 1-year Microsoft 365 Personal subscription, and a HUAWEI Watch GT2e. You also get free shipping and even avail of 0% interest for a 12-month installment plan (Metrobank cardholders only).

As a celebration of serving its APAC customers for 10 years, HUAWEI will give away a 10th Anniversary Gift Box when customers purchase select items from any HUAWEI Experience Stores nationwide. The 10th Anniversary Gift Box is worth P2,890. The tech giant is also installing and giving away free screen protectors from November 12 to 15! Other promos include a multitude of freebies for every purchase of a Huawei MateBook, MatePad, and MateView.