AirPods Pro VS realme Buds Air Pro: Which Is Better? 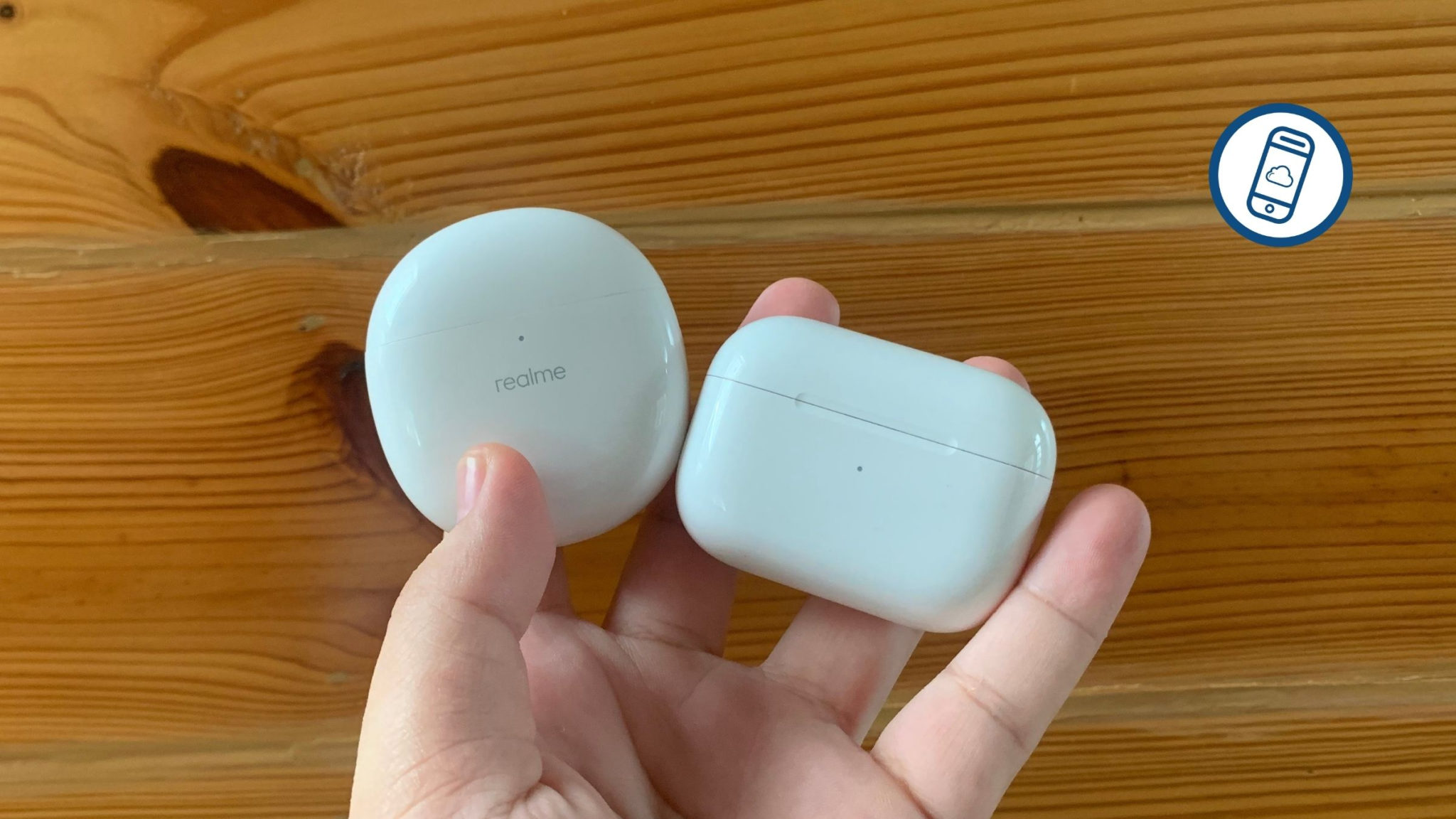 I’ve had the realme Buds Air Pro for more than two weeks now and they really impressed me so far. I even wholeheartedly recommended it for Android users in my review! One thing I immediately thought of while using them was the AirPods Pro, Apple’s take on wireless earbuds. I initially thought it would be unfair, but they both share a lot of features. With that in mind, I’m gonna do it. This is AirPods Pro vs realme Buds Air Pro. Which is better? Read on!

DISCLAIMER: THERE WILL BE A WINNER. No ties are gonna happen here!

This really doesn’t count, but I just wanted to start with the packaging. In simple Apple fashion, they went for the plain white box with a picture of the box in the front. Meanwhile, realme went for a yellow box that open the same way as the AirPods Pro box. I personally prefer the more compact AirPods Pro box, but that’s personal preference at this point. On to the next one!

The AirPods Pro vs realme Buds Pro comparison begins with the charging case. I really didn’t expect the opening and closing experience to be really similar. Although the Buds Air Pro case is portable enough, I can imagine it not fitting some tight pockets. The more compact case of the AirPods Pro can fit even the smaller pockets in jeans. I’m going for the AirPods Pro on this one.

In terms of setting up for the first time, the experience is different. With the realme Buds Air Pro, you either connect to them using Google Fast Pair or via the realme Link app. I find the pairing through the Google Fast Pair method hit and miss for me.

Meanwhile, pairing the Buds Air Pro via realme Link is fairly straightforward. After setting it up, I immediately got to use it to listen to music and some podcasts. I didn’t really experience any hiccups on that front. One thing to note is that you can use any Android smartphone to get the same experience with realme Link.

With the AirPods Pro, the initial setup is easy. When you first open its case near an iOS device, you can instantly connect it. You even see how the controls work on the buds and in iOS. The thing is, you can only get this experience when using Apple devices. (Pairing is done only on iPhone, iPad, and Apple Watch.)

Although the initial setup experience on the AirPods Pro is great (magical even), I would say that the flexibility of the realme Buds Air Pro stands out. I can get the same functionality out of the Buds Air Pro on any Android phone by simply getting the realme Link app.

Note that my thoughts on the fit of these buds are solely based on my ears. Your experience may vary.

The earbuds of the realme Buds Air Pro looked like a mashup of the company’s Buds Air with an in-ear tip. I find the stems tall but probably almost the same as regular AirPods. There are two mics on the Buds Air Pro: one near the ear tip and the other facing away from the tip. This is to assist in the noise cancellation while taking calls.

With the ear tips that come on the Buds Air Pro, I get a nice seal of my ears. The stem gets annoying at times, but not really a dealbreaker.

Contrast that to the AirPods Pro where I felt some discomfort when I tried those buds at first. I eventually got used to them. The comfort I got from the Buds Air Pro, I feel, was because of getting used to these for a year now. I actually like the more pronounced black accents on the vents and the sensor to detect if the AirPods Pro is in your ears.

The shorter stems on the AirPods Pro actually make the earbuds themselves really comfy for longer sessions. These buds have been a breeze to use while on an airplane! (To be fair, I haven’t tried the Buds Air Pro on a plane ride because of the pandemic.)

This was really close since I really liked the fit of the Buds Air Pro. Unfortunately, the shorter stems on the AirPods Pro do it for me.

Let’s start this section of the AirPods Pro vs realme Buds Air Pro with the ports. The former uses the Apple proprietary Lightning connector used on iPhones while the latter uses USB-C.

Both sets of earbuds have a custom chip in them to enable a better connection between the two buds and more! The AirPods Pro has the Apple H1 chip while the realme Buds Air Pro has the realme S1 chip. Those two chips enable most, if not all, of the cool features they have. Both also have Bluetooth 5.0 so power consumption is lower and the range is longer than before.

In terms of latency though, I tend to notice a small delay with the Buds Air Pro. It’s a minor thing, but something to point out in a comparison like this. Both earbuds tend to drop audio to the point that I had to re-wear them to work again.

In terms of auto-connecting, both earbuds work really well as long as you use the correct device for the job. I also tested out the Bluetooth range of both earbuds by playing music with my MacBook Air in the ground floor and going to the 2nd floor. It went well until I went to the far end of the 2nd floor which was pretty good.

Apple’s earbuds tend to be more consistent than the ones from realme. On top of that, it offers features you just can’t find on realme’s earbuds. That includes Spatial Audio for movies and TV shows that have surround sound data in it.

If I were to determine which one’s better in terms of performance, the AirPods Pro ekes it out here.

This aspect was really tough to determine. Both sounded good overall, with the Buds Air Pro giving the bass an extra kick. For me though, I didn’t notice the difference with Bass Boost+ mode turned on. The AirPods Pro offers a well-balanced sound for me. I don’t really have much else to say since I’m not a very keen audiophile.

As much as I hate to give a tie, this one is a tie.

Both can drown out white noise pretty well, with my only issue is when someone’s watching a movie or two near me.

I was hesitant to give yet another tie, but giving it that is a testament to what realme has accomplished with its ANC. Bravo!

Each AirPods Pro earbud lasts for 4.5 hours per charge with ANC on while the realme Buds Air Pro lasts a bit longer with 5 hours with ANC on.

I’m giving this one to realme’s Pro earbuds.

As much as there are people who don’t consider price as a good way to compare products, it’s the one that’s most visible to the consumer. At P4,990, the realme Buds Air Pro basically kills the AirPods Pro (at P14,990) in terms of value. I can even use the former with any Android phone, unlike Apple’s offering.

It’s obvious that I’m going with the Buds Air Pro on this one.

It’s pretty clear that both sets of earbuds bring a lot to the table. Although I use the AirPods Pro on the daily and I appreciate the feature set, some just want good sound and good ANC.

The realme Buds Air Pro is just as good as the AirPods Pro at 1/3 of the price. Honestly, its price really dictated my overall winner here.

Don’t get me wrong: I would still recommend the AirPods Pro for iPhone users. Nothing can really beat Apple’s ecosystem advantage on that front. For the rest of you who have Android phones, go for the realme Buds Air Pro. You won’t regret it one bit.

That’s my AirPods Pro vs realme Buds Air Pro comparison! What did you think? Was I being too harsh on either side? Sound off in the comments!

Published in Apple, Audio, realme, Tech and Versus