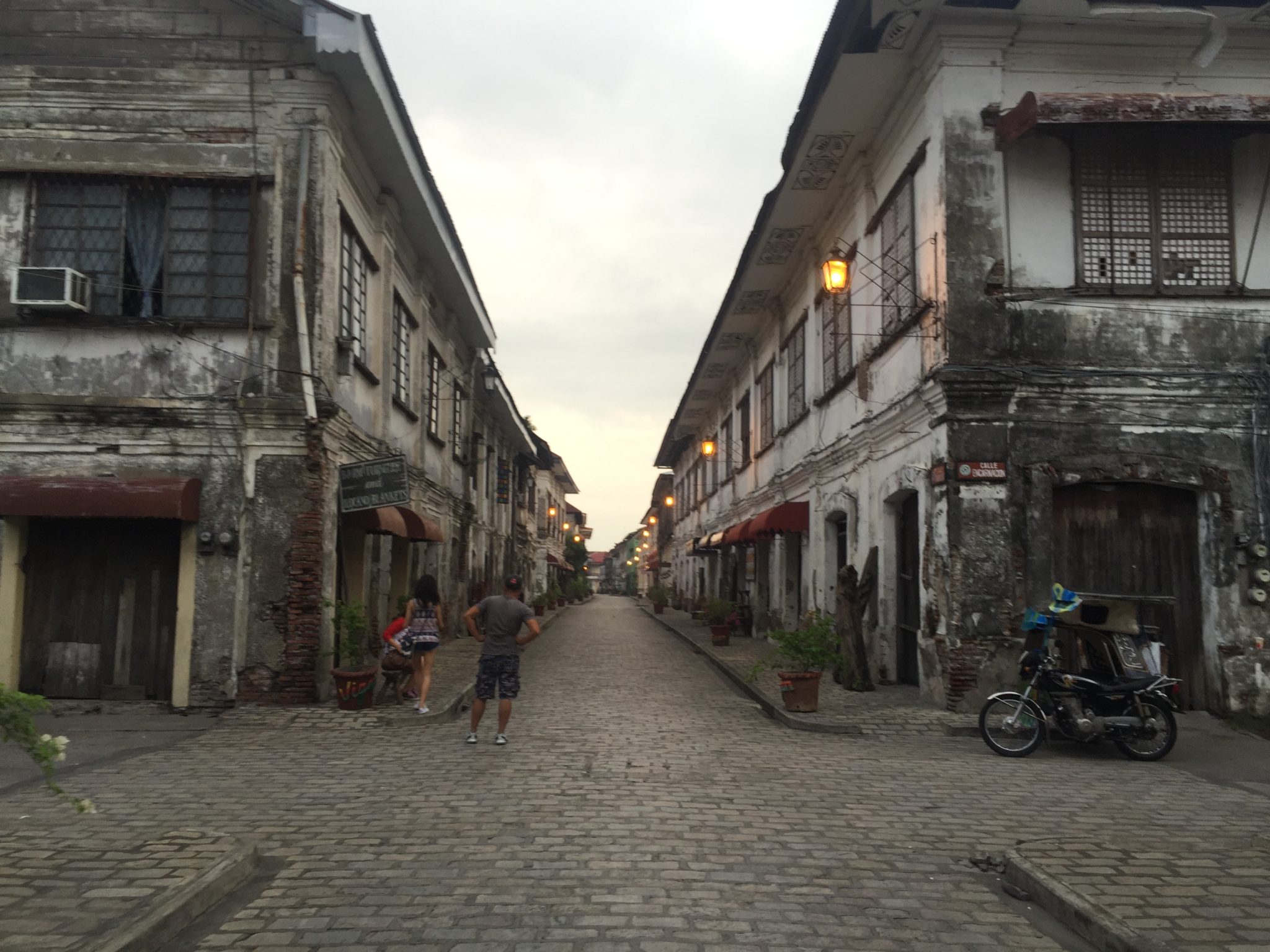 Sorry if it took longer than usual to post. I really wanted to post this but unfortunately I get home later than usual so I have less time to post on my blog. From now on, I’m going to plan my posts and activities after work. Maybe put up a post twice or thrice a week. I’m actually working on something for our Christmas activities this year. I hope to finish  this set of Travelogue posts before the end of October. Wish me luck guys!

At 2am on September 26th, we left Baguio to head to Vigan City, Ilocos Sur! I didn’t actually get some sleep in the transient house but I did in the van while travelling. My girlfriend even had body pains because I kept leaning on her. I really feel guilty for leaning on her more! Huhu. Anyway, we arrived at Vigan after 3 and a half hours of travel. The first thing we did when we arrived was look for a place to eat breakfast. Since some of us didn’t want to eat exotic food so we were searching for restaurants in hotels nearby. While we were looking around, we were taking pictures of the sights especially Calle Crisologo.

It’s actually my second time to go to Vigan so I already know how nice this place is but there were still some place where I wasn’t able to go when I was with family. Good thing I was able to go back there with my girlfriend and her friends and experience Vigan. 🙂

After looking around Calle Crisologo, we found a small hotel that happened to offer breakfast even to people who didn’t check in. Their “longganisa” was quite different than the one we have in Cebu (the one in Cebu tastes better, in my opinion). Shortly after we finished breakfast and washed up, we started our tour of Vigan!

Throughout our trip, we were riding on a kalesa  first went to the Bantay Bell Tower. It’s an old bell tower that is really maintained by the local government there since it is a tourist stop. Here are some shots I took of us from there:

After the bell tower, we went to the souvenir shop and I got a t-shirt for Dad! (Although I think it may have been a mistake because Dad doesn’t like shirts like that. Hehe. Next time?) Then we went to the nearby pottery and the potters there showed us how they make pots. All of us tried it but most of us failed. Hehe. Here’s one of us trying to make one:

It really looks easy but you really need patience, finesse, and a lot of experience in order to get this right. I really suck at that! Haha! After the pottery session, we went to Crisologo Museum where we get to see so many antique items that were owned by Floro Crisologo and his family. In case you didn’t know, the Crisologo clan is really popular there in Vigan. Floro Crisologo is the founder of the Social Security System (or SSS) here in the Philippines. There were a lot of things like old cars, weapons, and other stuff that people used to collect before. I have a plethora of photos of those stuff here:

After going around the museum, we went back to the city proper to go to Laoag and see more sights and hopefully get to go to the Sand Dunes! We passed by Calle Crisologo again. It’s so nice to see old houses being maintained by the locals and the establishments here. I think this is one of the reasons why Vigan City was chosen to be a New 7 Wonders City.

The wonder of Calle Crisologo.

When we got back to the city proper, we washed up some more so that we would look clean. After that, we went to the Baluarte! If you wonder what it is, it’s a place where Chavit Singson used to stay a lot. After some time, it was converted into a zoo. The place was nice! There were so many animals. Even a tiger was there!

After Baluarte, we were headed to Laoag City, Ilocos Norte! On the way there, we had lunch in a food stall. Unfortunately, we were hit by bad weather while eating so we hurriedly ran to the van afterwards so that we can reach our destination on time. Around 3 hours later, we arrived in Laoag! Our first stop was supposed to be the Sand Dunes but due to bad weather, we decided to move it to the next day. Instead, we went to the Marcos Mausoleum. It featured a lot of the stuff owned by Ferdinand and Imelda Marcos. (It was obviously the old stuff.) The place really showed the history of Ferdinand Marcos from his childhood until his relationship with Imelda. I didn’t have any pics there since it’s actually my second time visiting but it’s really a good place to be educated about the president who put the Philippines into Martial Law.

After that, we went to the Malacanang of the North. It was a good thing that we got there on time because we arrived just MINUTES before closing time! I was surprised at how clean the place is. Maybe that’s just because of the entrance fee being asked at the door. Hehe. It was around P20 though so it’s okay. Here are some stuff I shot:

We stayed there for a long while and then went to Paoay Church. It’s simply an old church that people go to back in the day. I don’t know for sure if people can still go inside there nowadays, but I am sure that it really looks beautiful from the outside. Since we couldn’t go in the church, I just took a jump shot of my tripmates!

After this cool shot, we left Laoag with tired faces to head to our next stop: Pagudpud!