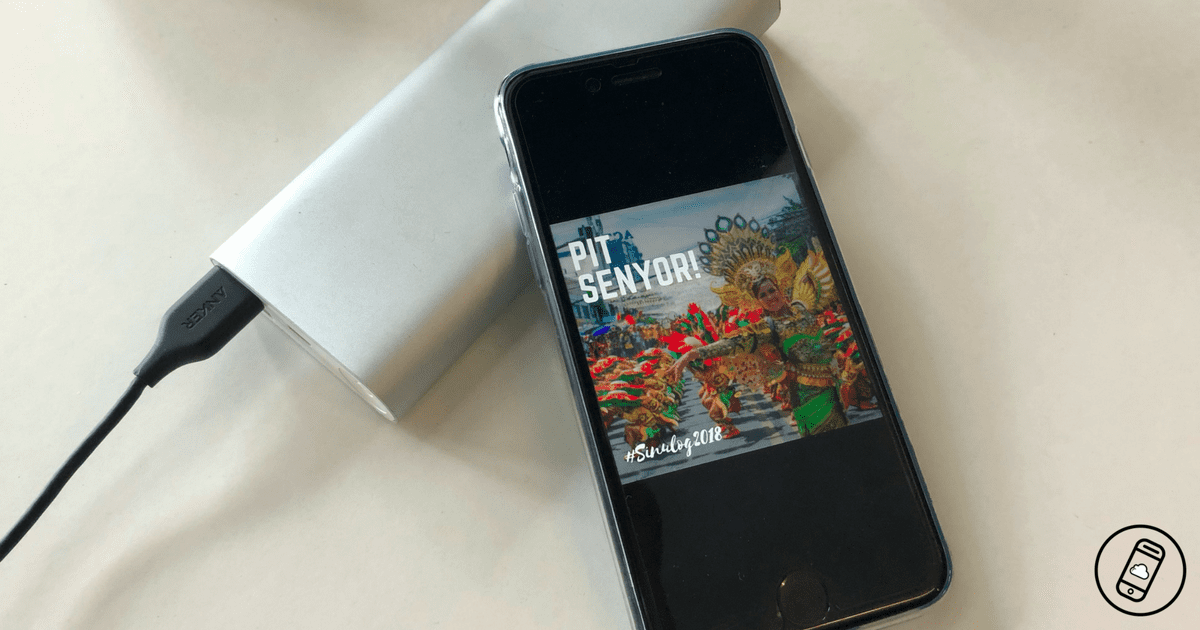 Disclaimer: All links to Lazada are affiliate links.

Sinulog is the biggest festival in Cebu and one of the biggest in the Philippines! A lot of tourists book their hotels months in advance just to see the Grand Parade. Some of the locals and tourists attend big parties around the city! The festive mood is there and you want to capture it all with your phone…

…then suddenly you run out of battery.

It really sucks when you don’t have the right gear at the right time! I would recommend that you enjoy most of the parade offline. There are times though when you can’t help but take that great Sinulog photo!

With that in mind, here are 5 must-have Sinulog gadgets! These will make sure that your online experience in Sinulog will be topnotch!

This could arguably be the most important of all your Sinulog gadgets. As with the example I stated above, you don’t want to be the person that didn’t have photos at the time. (unless if you do, of course)

Investing in a powerbank will help you last throughout the Sinulog festivities, especially the Grand Parade and those various parties! Anker PowerCore 20100 – I recommend this for people who will be out the WHOLE DAY. (even through the next day! Hehe) With a 20100 mAh battery, you could charge your phone A LOT with this one. You can even charge 2 devices at the same time! ASUS ZenPower Slim – This powerbank is for those who are just going out for the Sinulog parties that are happening around the city. But at 3000mAh, this may not be for everyone. I recommend getting the Anker one if you think this won’t help you.

Speaking of powerbanks, what use would they have if you don’t have extra charging cables around? Get an extra Lightning cable (iPhone), a microUSB cable (most Android phones), or a USB-C cable (newer Android phones). There’s nothing wrong with having extra cables around ready to be used. Yes yes, I’ve been using Anker a lot lately. I got excited when they opened their stores in Cebu! Their products really do live up to their name (mostly). Even though they look plain, the cable is really durable. It also helps that it comes with a free cable tie to keep it tidy.

In case of emergency during the parade, you need to contact your relatives or friends in order for you to get to them. Because a lot of people will be in the parade route, cellular coverage is hard to come by.

Based on my experience during past Sinulog Grand Parades, Globe has the BEST cellular coverage. This may sound biased but I suggest you get a basic phone with a Globe SIM so that you are able to call and text despite the number of people there.

There was one time when I used Sun Cellular and the signal WAS BAD. It was “turn-off-my-phone” bad. This was one of the factors I considered when switching back to Globe.

UPDATE: Shortly after I posted this last year, the Cebu City government announced a cellular signal shutdown. That made this item pointless. I don’t know if they’re going to do that this year (2018), so be prepared in case that happens. Speaking of being online, you can’t just rely on your phone’s internet connection. You need a backup just in case you need to contact people online. Why don’t you get a Pocket WiFi device?

They’re small, light, and now costs less than 2000 Pesos! It even comes with LTE now so you get the fastest available connection during Sinulog!

(Like the previous item, be prepared in case a cellular signal shutdown happens again.) Lastly, get some earphones! They can help you escape the noise after you’ve had enough partying for one day. I won’t be doing recommendations for this since you probably have one lying around there!

There you have it! Those are my 5 MUST-HAVE Sinulog Gadgets! Did I miss anything? Sound off in the comments below!