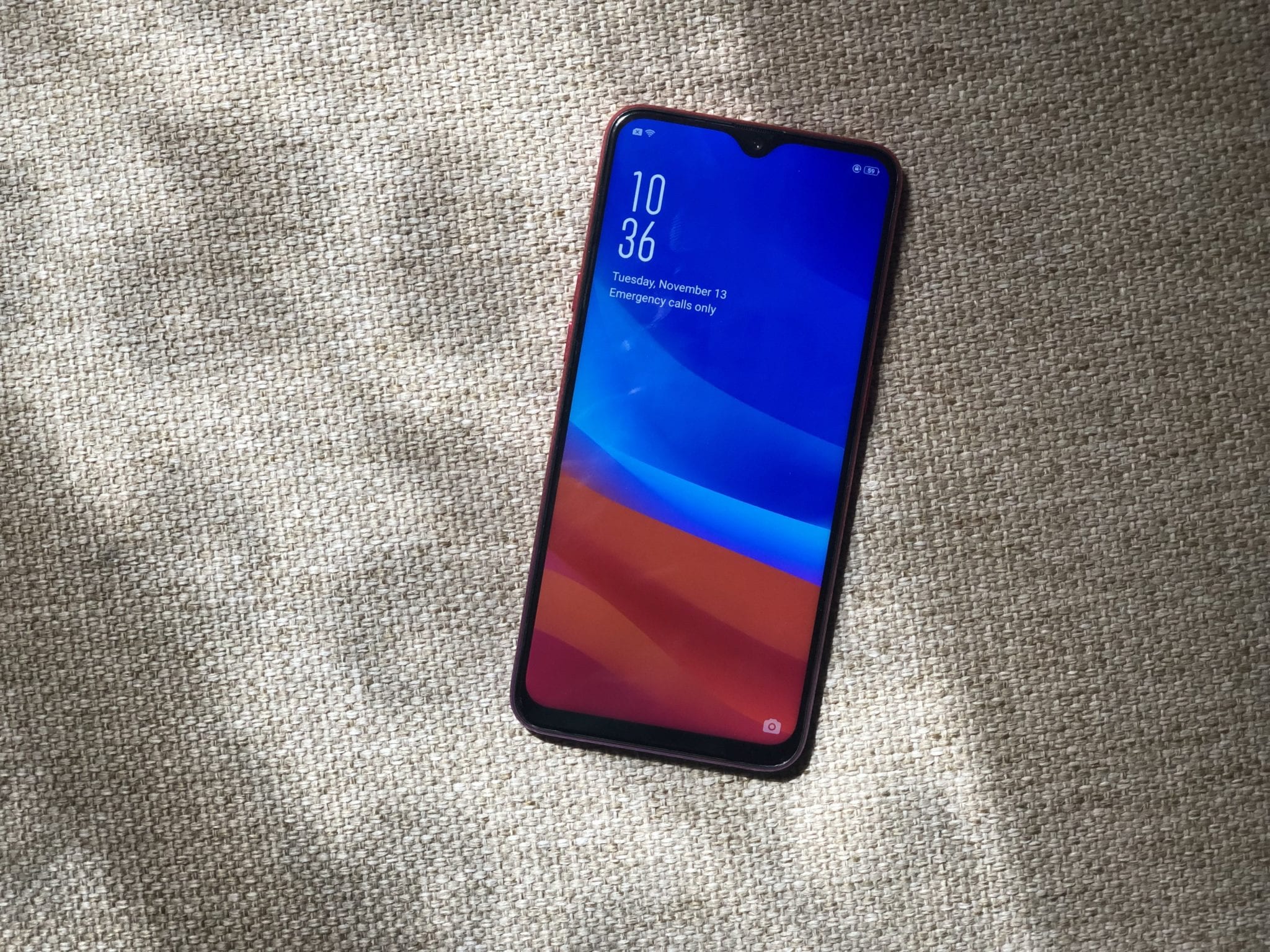 As I said in my first impressions post, OPPO is on a roll! They launched FOUR PHONES this year: the OPPO F7 in April, the OPPO Find X in July, the OPPO F9 in August, and the recently launched OPPO R17 Pro this month. They also launched the A3s and A7 as their entry-level smartphones. OPPO feels so confident in their full lineup in the Philippines since they became the #1 phone maker in the country for Q3 2018.

Despite their full lineup, I believe that OPPO will still sell a lot more of the F-series than the rest. My only concern is that they put out TWO F-series smartphones in a year. They just launched its predecessor, the F7, last April. Does the OPPO F9 offer more for its asking price of P17,990?
Let’s find out in this review.

I got the Sunrise Red color for review. Although I personally prefer the Midnight Blue color, I never would have thought that this was anything but beautiful. While the F7 went for solid colors, OPPO rode the gradient train with the F9. I love how the gradient goes from red to a slight purple on the bottom. It’s so fascinating that the color of the bottom of the phone is so different than the one on top.

What’s also fascinating is how the OPPO F9 feels more premium in the hand. Despite its deceptively light build, the phone doesn’t feel cheap at all! Its super glossy back may leave it with fingerprints in seconds, but the phone is really photogenic. The diamond pattern on the back is a nice touch. The buttons are clicky enough but feel too thin for my taste. I could easily miss them if I wasn’t looking at them.

The notch trend nudges on with the F9. Good thing they made it so small that they just left enough space for the 25MP front camera. (More on that later.) The teardrop-shaped notch would have been great if it weren’t for the OnePlus 6T and the Realme 2 Pro.

The actual display is a 6.3-inch IPS LCD display. It’s bright enough for most uses but tends to get a bit dim under bright daylight. I didn’t mind the chin at the bottom of the display, though I wish more Android phone makers would try to ditch it. It’s no OPPO Find X but the screen is great enough for its price. Watching videos and playing games with this immersive display is great!

One thing that REALLY ANNOYS ME is how some Android apps STILL don’t respect notches on phones! Just look at this nightmare while looking at Instagram Stories!

This may be a problem with Android as a whole than just this phone. It just pains me that Android apps can’t have similar, if not the same, experience as the iPhone. Let’s hope they fix it as soon as possible.

Don’t worry! The OPPO F9’s display is great! It may not have an AMOLED display, but LCD isn’t all that bad in the first place!

In the world of Android phones, RAM matters a lot. Thank goodness OPPO put in 6GB of RAM in the F9! This phone also has the MediaTek Helio P60. It was probably the first time that I really experience little to no lag in an Android phone. Apps run smoothly and I only get the usual Android hiccup. One thing to note is that these are the exact same RAM and processor combo as the F7.

In case you’ll look for it, here’s the AnTuTu and Geekbench benchmark scores:

It also helps that OPPO uses ColorOS 5.2 on top of Android 8.1 Oreo. iPhone users may feel right at home with OPPO’s take on Android. Unfortunately, the power user may be disappointed that they can’t even change to their third-party launcher of choice. (I tried multiple times but it didn’t work at all.)

Two of the most useful features I found in ColorOS on the OPPO F9 are Smart Sidebar and long screenshots. The latter may be in other phones but I think the sidebar is really useful for me. I mainly use it to switch between Instagram and the Keep Notes app. It is pretty useful when copying the hashtags I use for Instagram posts.

I’m glad that Google got to collaborate with OPPO for Google Assistant and Google Lens support. I found Lens useful especially when copying web links in photos! Since I don’t use the Assistant a lot, I can’t comment on how good it is here. Speaking of the camera…

OPPO really made a name for themselves thanks to the cameras on their phones. They focused more on the selfie cameras first, giving them the Selfie Expert moniker. Today, they also have pretty good photos for the rear camera as well.

The OPPO F9 continues that trend by being the first F-series phone with dual rear cameras! The second camera is mainly used for better zoomed photos and portrait mode. The phone has a 16MP main camera and a 2MP depth camera. Here are some samples of the rear camera.

It does a good job with daylight photos and I am really surprised with how much dynamic range it has! The colors really pop! It sometimes screws up with the highlights especially with the sky. Indoor shots are good depending on the lighting.

It tends to struggle in low light though. Although some parts may seem bright, it ruins the rest of the photo with either blur or noise. Either way, I wouldn’t count on it too much on that front. It doesn’t help that the F9 tends to overexpose the photo a bit.

Shots taken with the 25MP front-facing selfie camera actually look good for the most part. I love that it has a wide-angle in order for me to fit more people in a group selfie! Selfies are bright and tend to go on the warm side. Results may vary depending on the light situation you are in.

The selfie camera on the F9 gave me the opportunity to use the AI Beauty mode. For the most part, it works as intended but I prefer not to use it much. It really alters your face and I prefer showing my true self. It’s a preference thing for me so if you like these kinds of modes then the F9’s beauty mode works well.

All in all, I really enjoy using the front camera on the OPPO F9. In most scenarios, I can say that this is WAY BETTER than the iPhone X’s front camera!

If there was one feature I could look to make the F9 stand out, it’s VOOC. When I first got the phone, it basically had no charge at all. I took the opportunity to charge the phone with the charger inside the box. All I could say is:

It managed to charge the OPPO F9 from 0 to 80% in less than an hour! There were even times where I needed a quick charge before leaving the house. I get around 20-30% charge in around 10-15 minutes! It’s NUTS! You can’t use VOOC Flash Charge without the cable and adapter that comes in the box though. It’ll charge up to 5V / 2A when using other chargers. VOOC uses 5V / 4A charging that makes it faster than most.

If you noticed, I haven’t mentioned battery life a lot. It typically lasts me a full day of moderate use (social media, taking photos, watching videos). When running games, I had to reach for the charger sooner but it’s nothing that VOOC can’t handle.

SHOULD YOU BUY THE OPPO F9?

With everything I mentioned up top, I can fully recommend the OPPO F9. The processor and RAM are identical with the OPPO F7, so you shouldn’t get the F9 if you’re looking for performance. GET THIS PHONE if you’re coming from an OPPO F5 or older.

If you need a reason to get the F9, it’s VOOC. Once you’ve tried charging this phone with VOOC, you’ll want other phones in this price range to do the same. Another reason to get this is its awesome 25MP front camera. Just having a wide-angle front camera makes the difference and it still has beauty modes if you fancy that.

I just wish OPPO would focus on just one F-series phone a year and make the upgrades count. Having two versions come out just months apart really makes some users regret their purchase. Here’s to hoping they make a big leap next year.