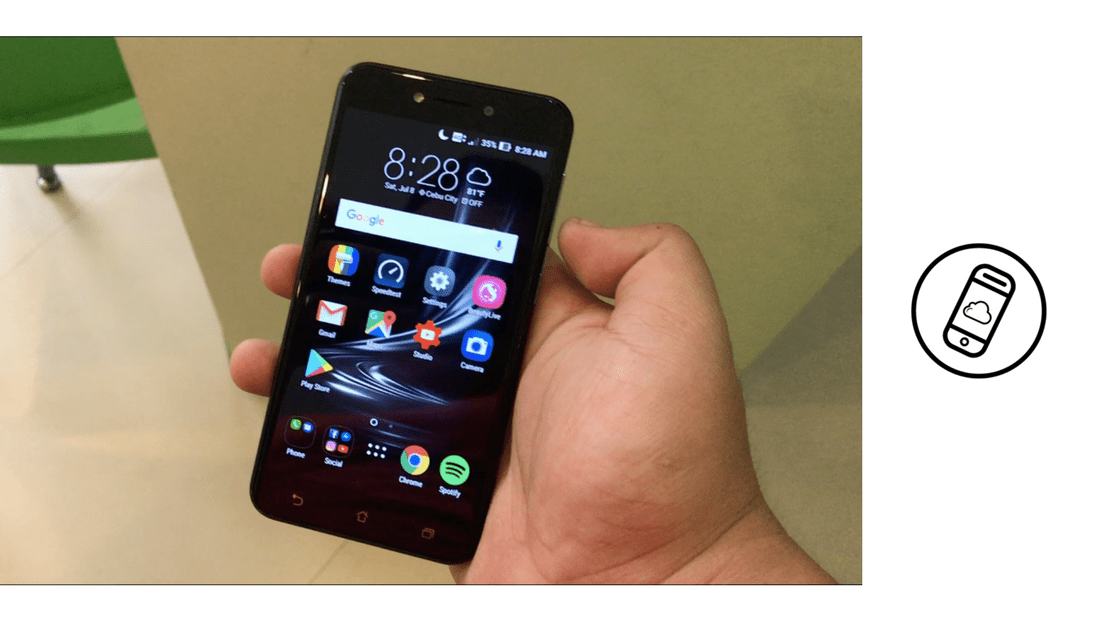 ASUS went through a lot recently. After a 2016 that didn’t meet expectations, they are back with a vengeance! In 2017, ASUS launched a lot of phones including the ZenFone 3 Zoom and the ZenFone Live! While the former’s target user is the mobile shutterbug, the ASUS ZenFone Live is for the person who loves doing live videos!

After a week of using it daily, I’m finally ready to give my overall thoughts on this budget-friendly smartphone. Is this a good buy or are you better off looking for another phone? Find out in my review! Ever since the ZenFone 2, ASUS keeps on delivering the goods when it comes to phone design. There may be hints of other phones, but none of the designs are too offensive for my taste. I loved how the ASUS ZenFone Live reminded me of previous and current iPhones. The aluminum body really makes it feel more premium. I also like how the sides of the phone helps with the grip. I barely dropped it during the whole review testing. I’m glad that phone design is rarely bad these days.

I also like how clicky the buttons feel. Even though Apple simulated the feel of a button in the iPhone 7, having clicky buttons feels satisfying. It also helps that the volume buttons are bigger than the power button itself. The front of the ASUS ZenFone Live is a bright 5-inch 720p IPS LCD display. It’s bright enough when using it indoors but don’t expect too much when you go outside. There are capacitive buttons below the screen and honestly, it sucks because there’s no backlight. I found the layout of the buttons to be the usual but it would be better if they had backlighting. If they found it too expensive, why not use on-screen buttons? I want to be able to use this phone at night so this is a big deal for me.

In case you need the spec sheet, here it is.

The screen was okay. There’s nothing to write home about though. IPS LCD displays are common these days thanks to Samsung’s obsession with OLED displays.

Even though the phone had underwhelming specs on paper, the ASUS ZenFone Live is snappy. The only lags I found were mostly due to the usual Android lag. I did however experience some crashes but they did not take away from the feel of it.

The phone can really handle basic LTE connectivity very well. Despite it having just the basic LTE bands, the support is just enough for daily use. Just don’t expect the usual LTE performance indoors.

When I first heard the speakers, they really surprised me. They were LOUD for a phone that costs less than P10K! (Although it’s not obvious in the video, I can attest to its loudness.) This is all thanks to a 5-magnet speaker system that helps in producing that awesome sound. I’m just amazed that ASUS got to put this technology in a budget smartphone. Good job!

The main feature of the ASUS ZenFone Live is its ability to beautify your live video! The feature, named BeautyLive, integrates with apps that have livestream capabilities. It automatically removes blemishes on your face in REAL-TIME during your live video!

For proof that it works as advertised, I did a livestream using the ASUS ZenFone Live below!

(Unfortunately, the livestream cut short due to internet issues. I did Part 2 of this using my iPhone 7.)

Despite the hiccups, I can say that ASUS did a really great job with enhancing live video through BeautyLive! If you do live streams often, you should seriously consider this smartphone. The ASUS ZenFone Live has good cameras that you would expect from a high-end smartphone three to four years ago! The rear camera’s quality is good enough for most situations but it can’t hold a candle in low light. The low light photo was so bad that I don’t want to show it here in the review. The front-facing camera is also decent enough for those good selfies. It’s also good enough for a livestream as you saw above. Like the rear camera, it’s also bad at low light. Good thing that there’s a front-facing LED flash to go with that front camera. I personally don’t like using flash for my photos though. First off, I would just like to say that my daily driver before doing this review is an iPhone 7. Although I use a lot of Google services, I manage to get by with just an iPhone since I also use Apple services mainly for iCloud backup.

Thanks to those Google services, it became easier to adjust to an Android phone like the ASUS ZenFone Live. It worked like magic when I finished setting it up.

One thing I don’t like about the software is ZenUI. It may seem like a clean user interface but I’ve always preferred clean Android from Google. This is no big deal for normal users though.

A redeeming factor for ZenUI is its lock screen shortcuts! There is one

It doesn’t help that the ASUS ZenFone Live comes with Android 6.0 Marshmallow out of the box. (Just so you know, Android 7.1.1 Nougat is the latest stable version.) I hope that ASUS will update this phone to Nougat.

One thing I like about Android is its notification system. I feel that notifications on an iPhone feel simple and sometimes boring. I commend Google for constantly improving Android’s notifications over the years.

All in all, my big complaint with the software is how weird ZenUI looks compared to other Android skins.

Within the week of testing the device, I managed to get a solid 3-3.5 hours of on-screen time. (This is the amount of time that the screen is active.) For a budget phone, that’s good enough for me. It can last a full day before charging it at home. Unlike its sibling, the ZenFone 3 Max, it’s just a normal smartphone.

Should You Buy the ASUS ZenFone Live? At the end of the day, the ASUS ZenFone Live is a budget-friendly smartphone. If this phone’s target was the high-end, it would be considered a failure. Good thing ASUS aimed this phone for people on a budget. Thanks to BeautyLive, this phone is a great livestream device! You definitely should get the ZenFone Live solely on the livestream aspect. It also helps that the phone looks good as well. You won’t be disappointed when you buy this phone.

Best of all, you get the benefits shown throughout the review for just P6,995! If you’re looking for a live video phone or a secondary phone, the ASUS ZenFone Live is for you!

And that’s it for my ASUS ZenFone Live review! Do you agree or disagree with my thoughts? Did I miss anything? Leave your comments and reactions down below!